The Tour de France is back in Vaucluse!

For an unprecedented double climb of Mount Ventoux in 2021

This year, Mount Ventoux returns to the Tour with a bang, but also with a new and exciting twist! For the first time in the history of this legendary race, the 1910m Giant of Provence will be climbed twice by cyclists from all around the world. It’s not just any challenge, it’s an unprecedented test for the 199 km long 11th stage of the race, the entirety of which takes place in Vaucluse. It’s going to be a great day for the sport, that’s for sure!

The exciting news has delighted Vaucluse residents and cycling fans alike. On 7th July next year, the Tour de France will take a spectacular 360° route around Mount Ventoux with 2 climbs to the dizzying heights of the summit. The day’s stage will run from Sorgues to Malaucène. Along the way, the cyclists will climb the incline of the Giant of Provence once via Sault (5%), then a 2nd time via Bédoin and the Chalet Reynard restaurant (8.8%)!

This double hit has never been done before, particularly as the route’s terrain is just as challenging as the Col de la Liguière climb, which culminates at 998 m (6.7%) and passes through numerous villages (such as Gordes and Roussillon). The pack of cyclists will also pass through Fontaine-de-Vaucluse for the 1st time, where the incline is 14%, noted in the official stage as the “197 m slope of Fontaine-de-Vaucluse”.

Find out more about the stage

THE 2021 TOUR DE FRANCE IN THE VAUCLUSE

Topography of the official stage

THE 2021 TOUR DE FRANCE IN THE VAUCLUSE

Getting to Sorgues
In Sorgues, nine car parks will be open to visitors, three of which can be reached by the Vedène road from the Avignon/Carpentras dual carriageway.
At these car parks, free shuttles will be available to transport you to starting line until the beginning of the afternoon. For more information visit: www.sorgues.fr (french) 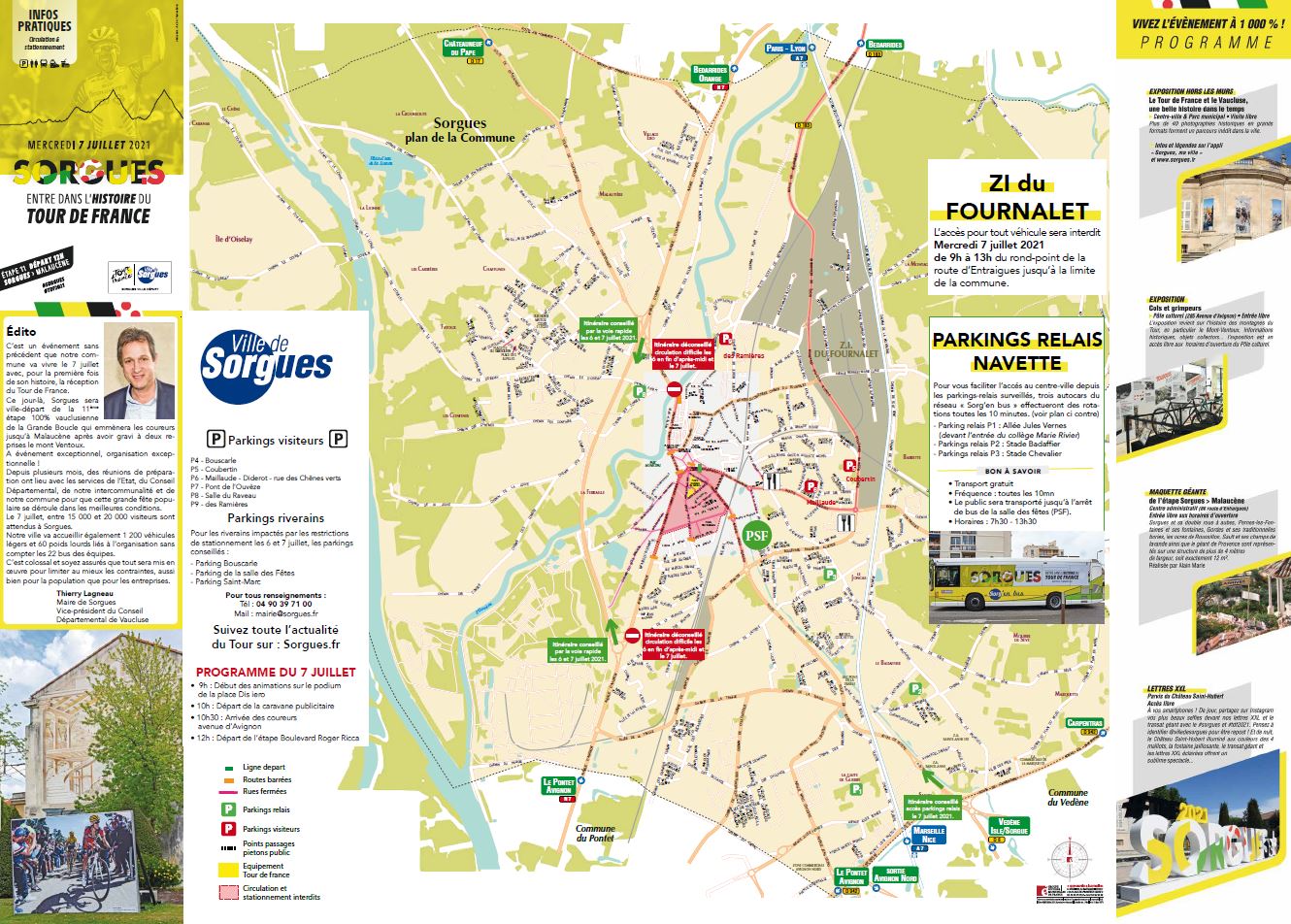 >> Click here for a route map of the Sorgues/ Malaucène stage

Arrival in Malaucène
Similarly, the finishing point of the stage, Malaucène, has two large car parks available to spectators.
The village of Malaucène will be closed to motor vehicles from 6th July at 20:00 and will be accessible only on foot from the car parks.
Further information: www.malaucene.fr

>> Click here for a route map of the Ventoux regoin

Parking is completely prohibited on all roads used by the race or reserved for authorise vehicles, and their surroundings, especially in woodland areas sensitive to fire risk.
This ban will apply from July 4th at 20:00 to all three Ventoux access points, the road between Malaucène and Bedoin, and also the RD 230 between Saint-Saturnin-les-Apt and Sault.
Please note that motorhomes, caravans and any similar vehicles will be able to park only at the specific areas provided (limited places available).

Environment
Ventoux is a Regional Natural Park, therefore it is essential that its environment is respected. Dedicated rubbish containers will be set up and “waste-sorting helpers” will aid the proper disposal of your rubbish.
The natural and woodland areas of the massif will not be accessible for security reasons. To this end, access restrictions will be put in place several days before the event, particularly at Ventoux.

Both the holy grail and the stuff of nightmares for even the most experienced riders, Mount Ventoux became established in the landscape of the Tour de France when it was added to the Tour programme on 22 July 1951 (stage 17, Montpellier-Avignon). The route’s unique surroundings, with a lunar landscape following the forest trail of the first 10 km, and the way it pitches up in the final few kilometres leading to the Observatory, make this stage a real challenge, even for the great champions.
In 1958, the Giant of Provence was chosen as the stage finish for the 1st time, during a time trial. From then on, it became a familiar figure in this international race, and has seen many of the greats pass through over the years: Charly Gaul, Poulidor, Eddy Merckx, Virenque, Thévenet, Pantani and Froome in 2016, who that year was involved in an accident with a motorbike and later crossed the finish line in double time on his spare bike.

Find out more about the history of the Tour de France

Since 1947, Mount Ventoux has seen: 16 Tour de France races
10 mountain stage finish lines, 2 of which were time trials
18 climbs to the summit, 2 more of which will take place on 7 July next year!

Don’t forget than Mount Ventoux is a proper mountain. Here is some advice to help you prepare and ensure the best conditions for your ascent.

Before your ascent:
Speak to your doctor. If necessary, have an ECG before your trip.
Start training. At least 1,000 km of cycling, 2 to 3 3-hourbike rides week, at high altitudes.
Prepare proper equipment (helmet, good road bike with brakes and tires in good condition), and warm clothes, as on average there is a 13° difference in temperature between the base of Mont Ventoux and its summit.


During your ascent… and descent!
Check the weather forecast. It is preferable to leave early in the morning (7am).
Warm up (at least 30 minutes before departure)
Stay hydrated (roughly 0.5L/h) and don’t forget to take food supplies.
After the endeavour, take the time to properly recover (stretching / hydration)
The descent is also very physical.  Dress warmly (gloves, windproof parka)
Control your speed, even if it means taking regular breaks, and keep to the right.

3 possible ways to tackle the Giant of Provence.

From Bédoin: the legendary ascent, the shortest and steepest!
From Malaucène: 21 km, 7.3% average elevation gain.
From Sault: the longest, and the least steep of the 3 routes.

If you want to compete with the legendary mountain, the Mont Ventoux cyclosport race, which takes place on the 2nd Sunday of June every year, is an ideal way to collectively share the experience of the climbers of Mont Ventoux.
Sign up here. https://www.gfmontventoux.com/

View the other cyclosport itineraries

A repeat of the Tour de France, and an event at the top of its game!

Created in 2019 by Nicolas Garcera, the Dénivelé Challenge is a race that takes place on the incline route of Mount Ventoux, prior to the Tour de France. It takes place in June every year. After leaving Vaison-la-Romaine, the riders take on the 180 km and 4,000 m of elevation changes which make up the stage, up to the summit of the Giant of Provence.

View a video of the Mount Ventoux Dénivelé Challenge

The summit of Mount Ventoux is getting an upgrade!

A transformation made possible by the local authority

A face lift for Mount Ventoux! A bald mountain exposed to the wind, which is where it gets its name, Mount Ventoux is a must-see destination in the Vaucluse. Each year, its summit welcomes more than 700,000 visitors from the Vaucluse, as well as tourists. In addition, the local authorities have embarked on significant works to upgrade the site for next spring, to maintain the appeal of the site, preserve the spectacular natural environment and improve amenities and safety.
The retaining wall in the Observatory courtyard is being restored and the latter is being developed, with the addition of a large set of steps: The “Mount Ventoux by Degrees” steps will connect the Belvédère de Provence to the summit. This extraordinary project will highlight the natural beauty of the setting, with information boards to be set up between April and June.
In its new finery, Mount Ventoux will be “dressed to impress” as it welcomes the largest televised cycling event in the world on 7 July 2021!

The summit of Mount Ventoux was re-measured during the local authority works, and we can reveal it currently sits at 1,910 metres! Well worth the climb, wouldn’t you say?

Works taking place at the summit of Mount Ventoux

Current
Improvements have been carried out in partnership with the Ventoux Regional Nature Park in order to maintain and protect the surrounding countryside and its fauna and flora as much as possible.

Future
The promenade will be accessible to pedestrians and cyclists only. Steps and paths will guide walkers, to protect the scree of Mount Ventoux. Cars will be able to use a free car park down the mountain, near the restaurant.